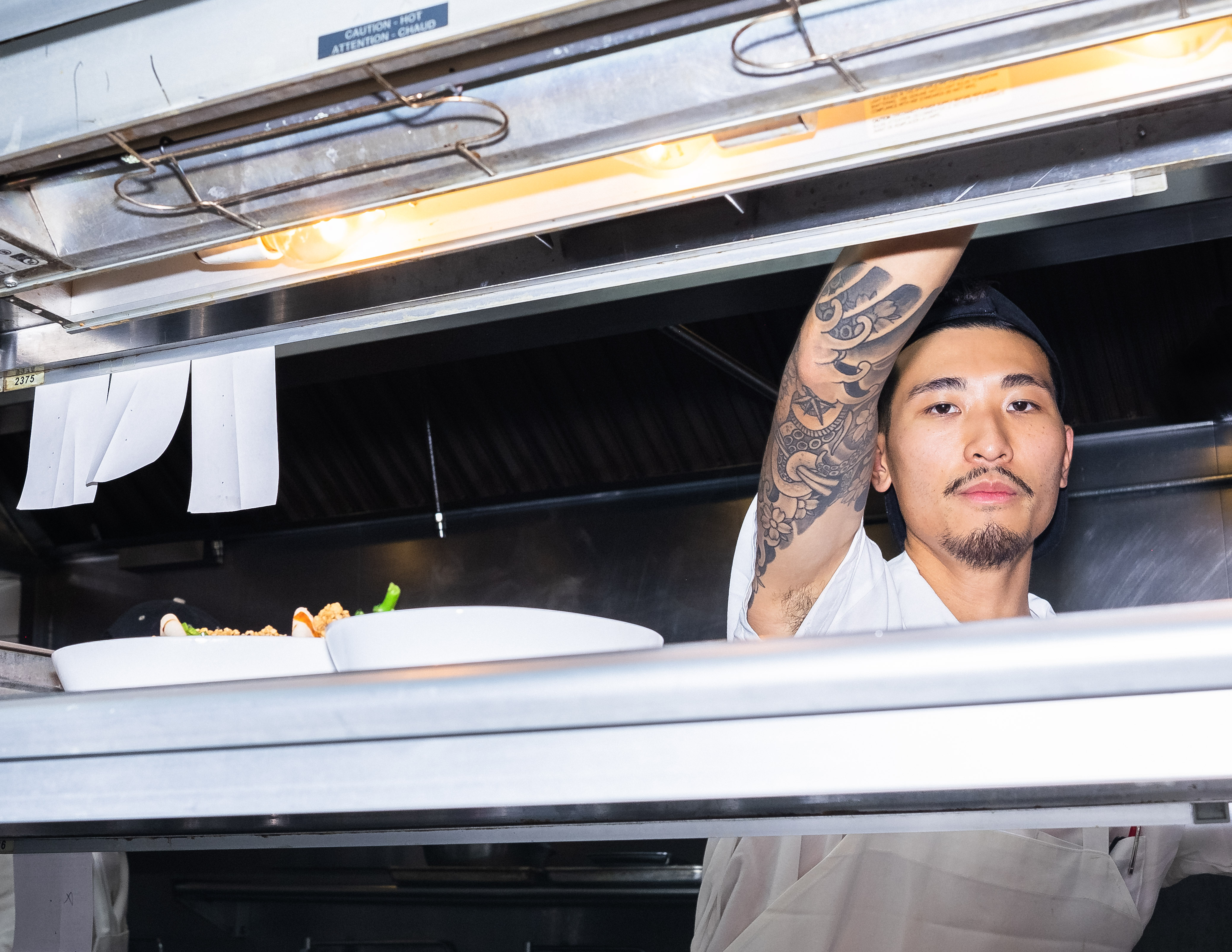 If Mean Girls was real, you’d find Calvin Eng sitting with the cool Asians in the cafeteria, eating lunch from Dig Inn. Yes, that Dig Inn. Brooklyn bred and raised in a traditional Chinese family, Eng always knew he wanted to try his hand in the toughest food city, we argue, in the world. We caught a moment with Eng in Williamsburg to discuss his favorite mozzarella sticks that can stretch longer than his wing span, his disdain for stinky tofu and how school has (sort-of?) led him to where he is today. 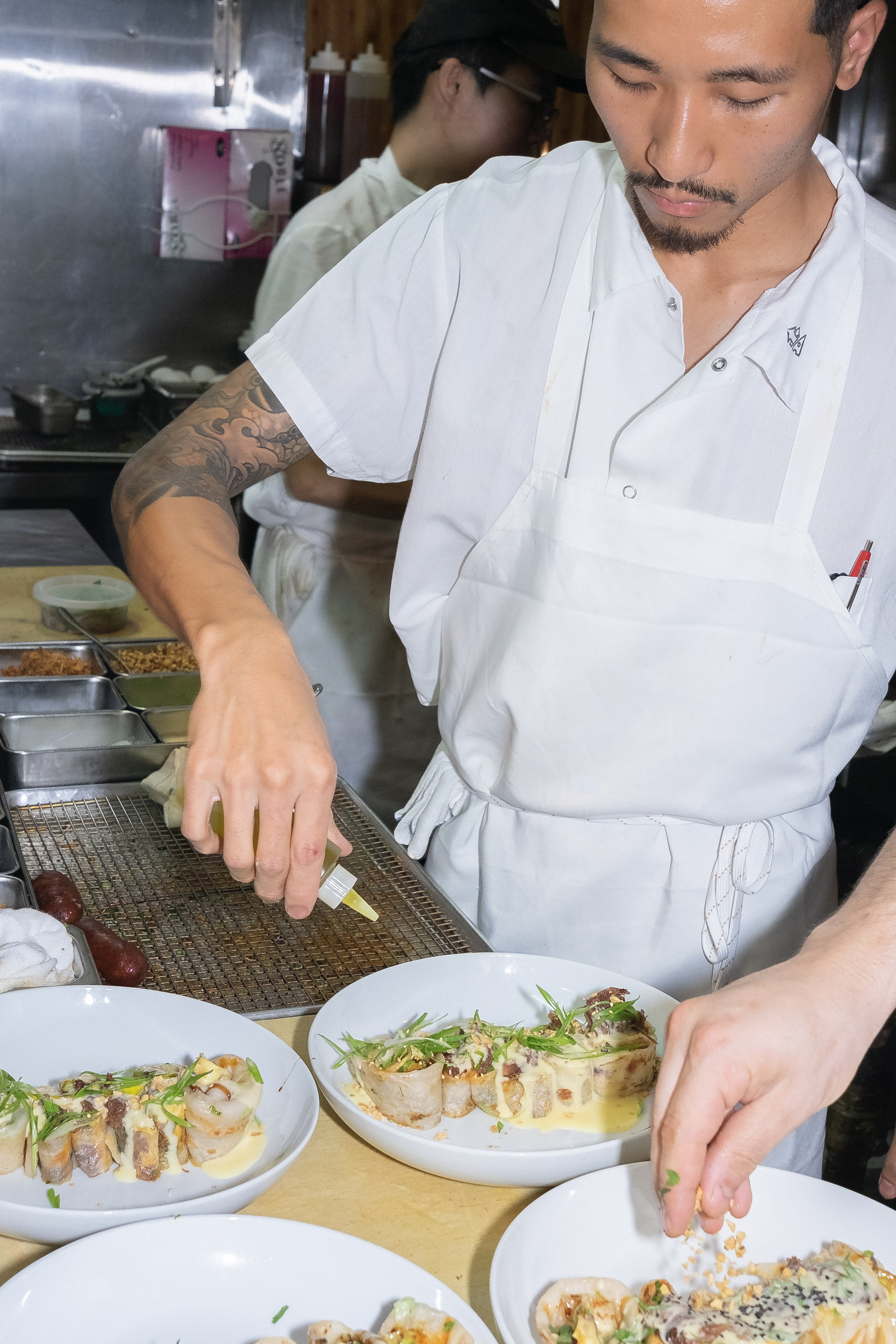 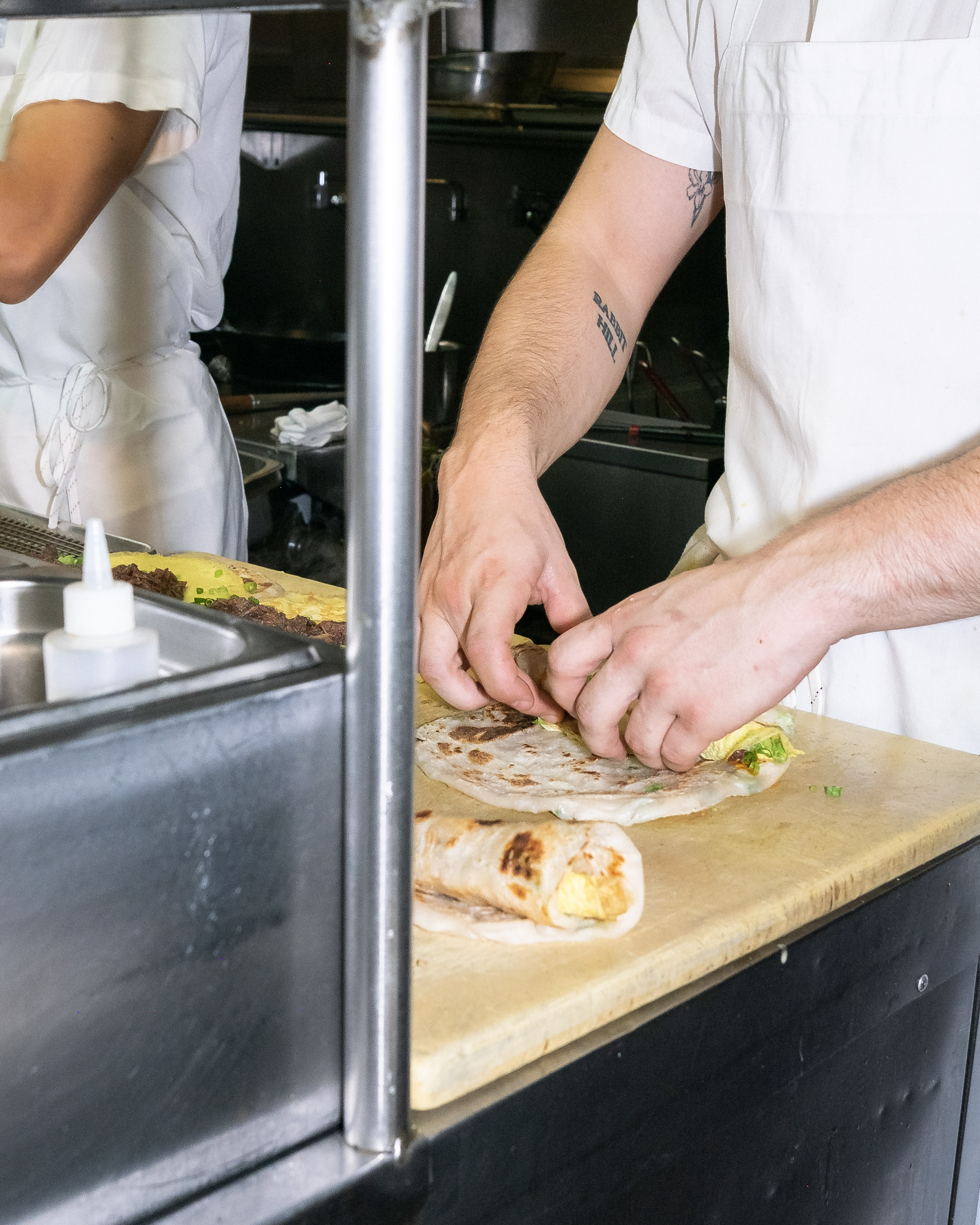 What is your full name, age and where are you from?

Calvin Joey Eng. I know - Joey, not even Joseph, weird. 25 and grew up in Bay Ridge, New York

I’m 100% Chinese, very very Chinese household [laughs]. My grandma, my dad’s mom lived with us. My mom’s mom lived with us. Multiple people in the house always. My dad passed away when I was younger, so it was full of women; my mom, one older sister - there’s a huge gap, a 9 year gap. My mom, my sister, my grandmas raised me.

Did you have childhood meals growing up?

Pretty much up until junior high of high school, everyday, I’d come home to eat Chinese food for dinner. I was sick of it by 5 - like 10 more years to go! [laughs]

Did you start cooking at home? Or was that something you never did?

I definitely was, I was always hanging out in the kitchen with my grandma and mom. I’d always be in there, just wanting to wash dishes, wanting to cook stuff. That’s where it kind of really started. People ask me this question and it’s like, honestly I don’t fucking know - it just happened naturally.

What is your role?

How did you get started?

I was working since I was 13, but my first food related job was in high school when I was 15 at one of my buddy’s family deli in Park Slope. I was the fucking sandwich bitch. I think on my Linkedin I put sandwich artist or something, but when people ask me I like to call it deli technician.
‍

It’s where my career started at the deli. After that I was like yo, shit’s mad fun. I wasn’t just making sandwiches and shit, we were making family meals for everyone who worked there. Everyone would try to come cop this stuff that I was whipping up and like it didn’t have a legit hood so the whole place reaked. You’re not meant to be whipping up extravagant meals there.

I had to lie to my mom and say I was going to school for hotel management and hospitality. She didn’t want her son to be a fucking cook. Like, you’re going to pay 40 grand a year to become a cook after? That makes zero sense.

When I was in school, I was pretty much working full time in kitchens, going to school full time and I like Rhode Island, but I couldn’t wait to come back to New York. When I visited, I was like this is pretty cool, it’s a city, I can deal with it for 4 years - it’s not New York but I’ll survive.

Even when I was there, I was rushing to finish, rushing to get out, get back to New York to start working because I fucking hated school. I never liked school, I finished in 3 years. I just loved working. I honestly think I hate wasting time. A lot of it [college] was a waste and a lot of it was useful but half the stuff I could have done at a trade school, which I thought was a better move for what I wanted to do. It was cheaper, shorter, the important stuff.

All that aside, I’m not regretting college and talking shit about it - it got me to where I am I guess. 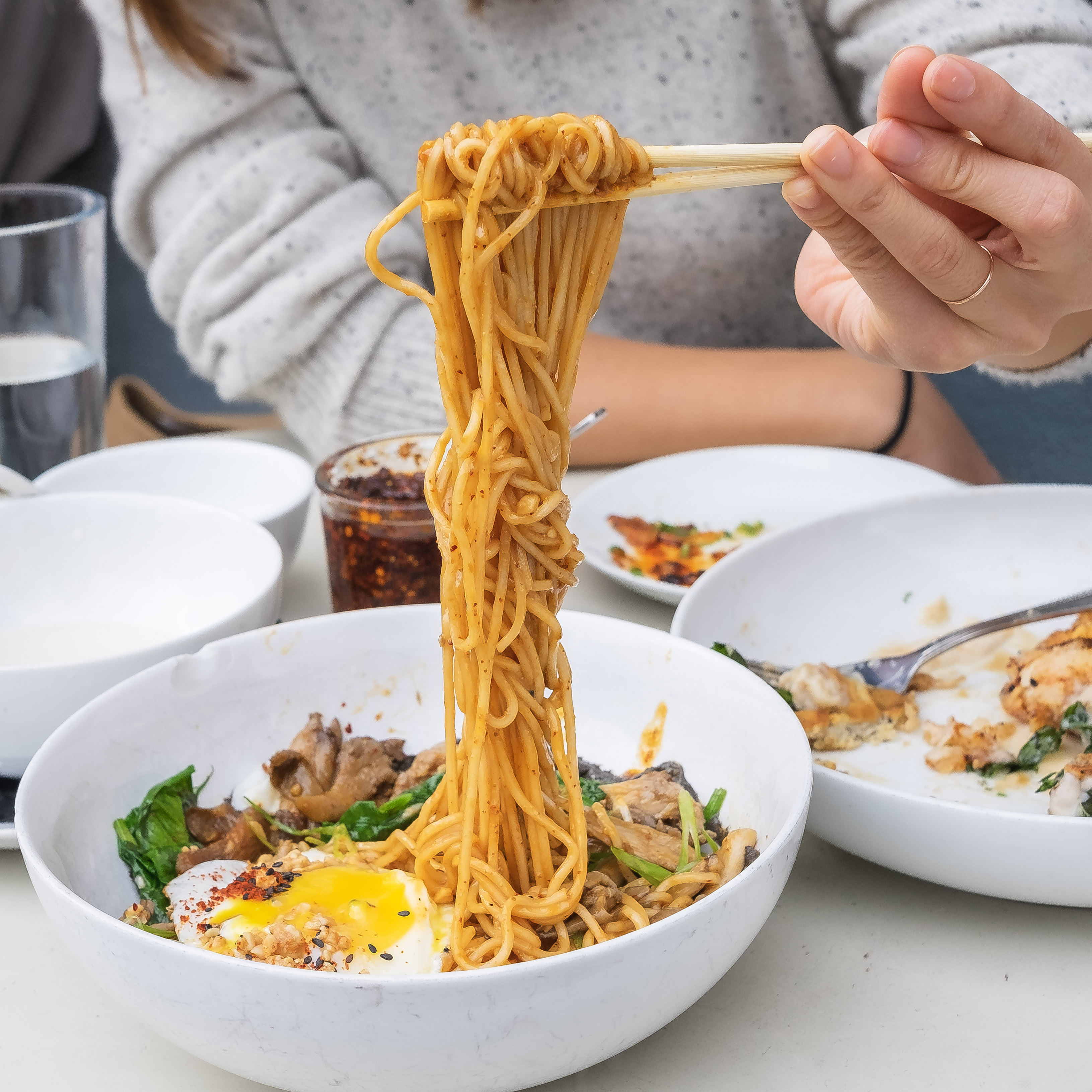 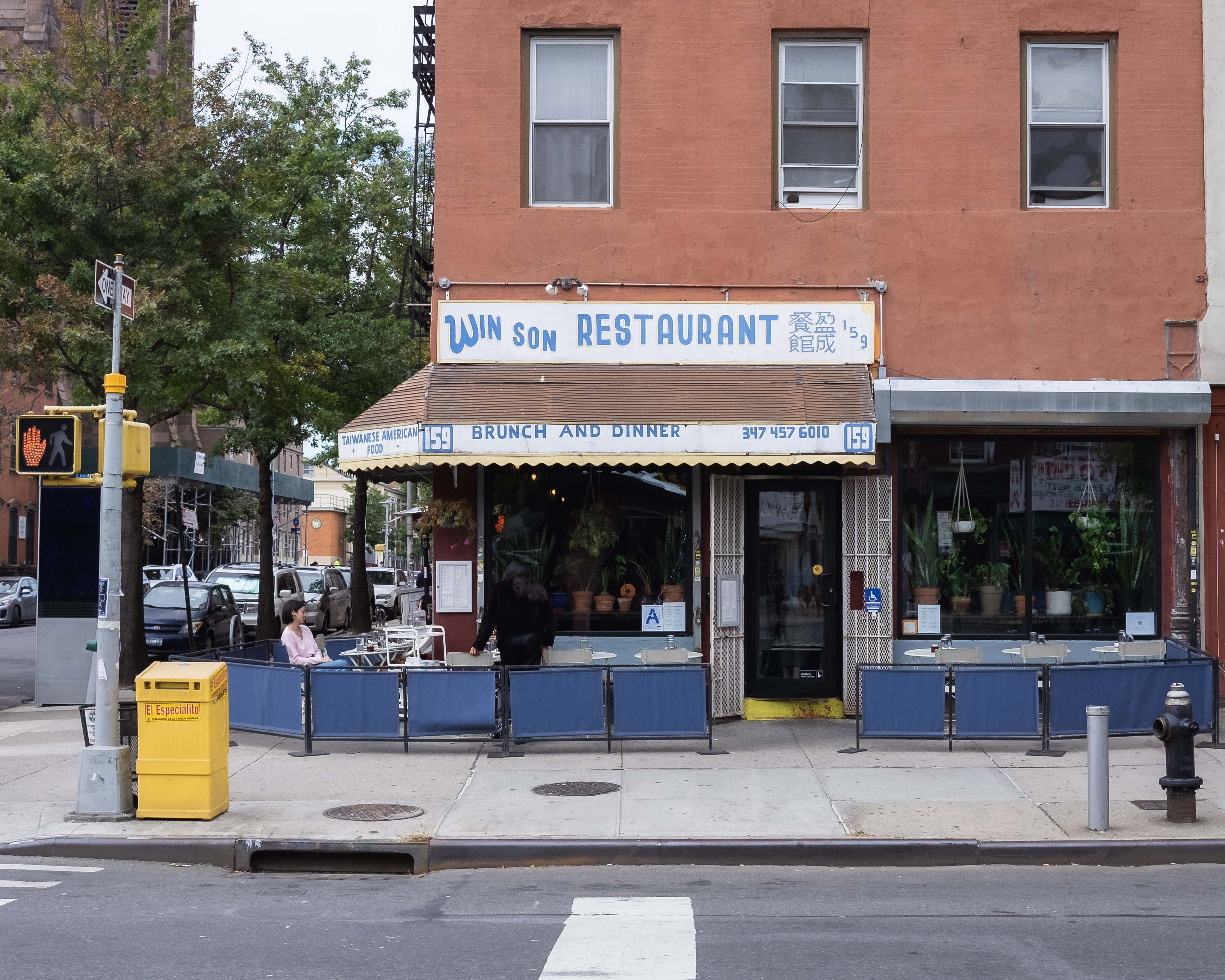 What was your first gig here?

During career fair in senior year, I don’t know if you guys know about Dig Inn?

They were like pretty small at the time, they had 8, 9 spots and they were at the career fair. I was in Rhode Island for 3 years so I didn’t know about Dig Inn and no one was at their booth. I was like, I’m gonna go say what’s up!

I started talking to the recruiter and we vibed really quickly, after that we set up a bunch of phone interviews, in-person interviews. I was like...this isn’t bad!

I was a chef at one of the restaurants - it was a Sous Chef title at the Flatiron location. I started there, I was there for 6 months and I was like yo, this shit sucks. No one here gives a fuck about the food. I came from catering, doing private gigs, good chefs and then going to school, having crazy amount of resources and to making fast, casual food is just not exciting or glamorous food.

It’s good food, the quality is great, I still eat there, don’t get me wrong. I go there at least once or twice a week to eat. I did that for 6 months, and I went on to doing R&D (research & development) for them for almost a year. And that was out in the Bronx Commissary Kitchen.

I went from lying to go to school, went to school, getting Dig Inn. While I was at Dig Inn, I got a DM from the owner of Nom Wah.

Because he fucked with Dig Inn so much…

And so I was like an Asian American and we linked up...a lot of shit happens in DMs! They hit me up, so after Dig Inn, I took a couple of months of a break, helping out friends, making a bit of money where I can and then the owner of Nom Wah went to open the Nolita spot. And I joined them for like 2 years.

While I was at Nolita, I met a load of people in the industry, most of them in the Asian food world specifically. That’s where I met Trigg from Winson. Trigg and Josh. 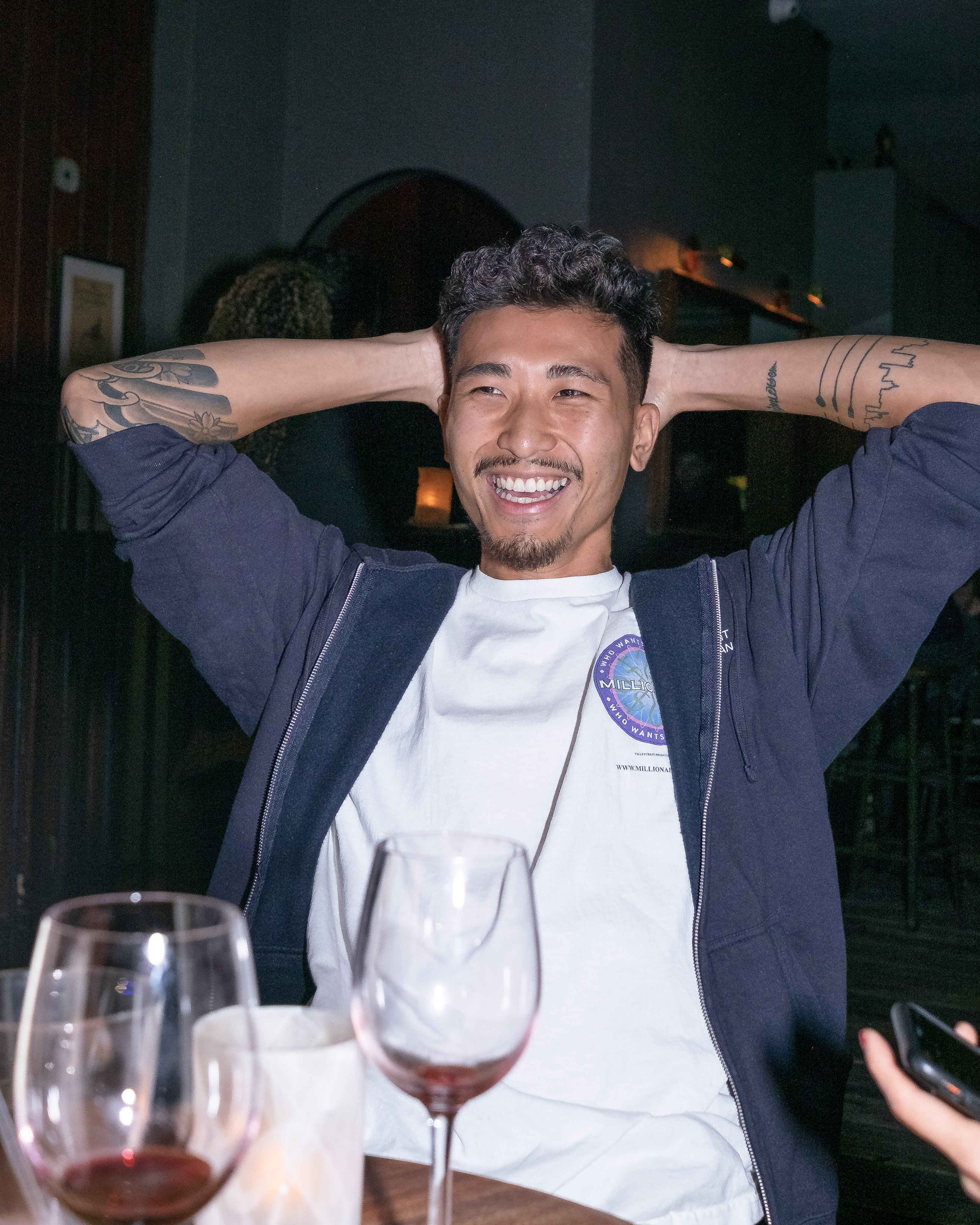 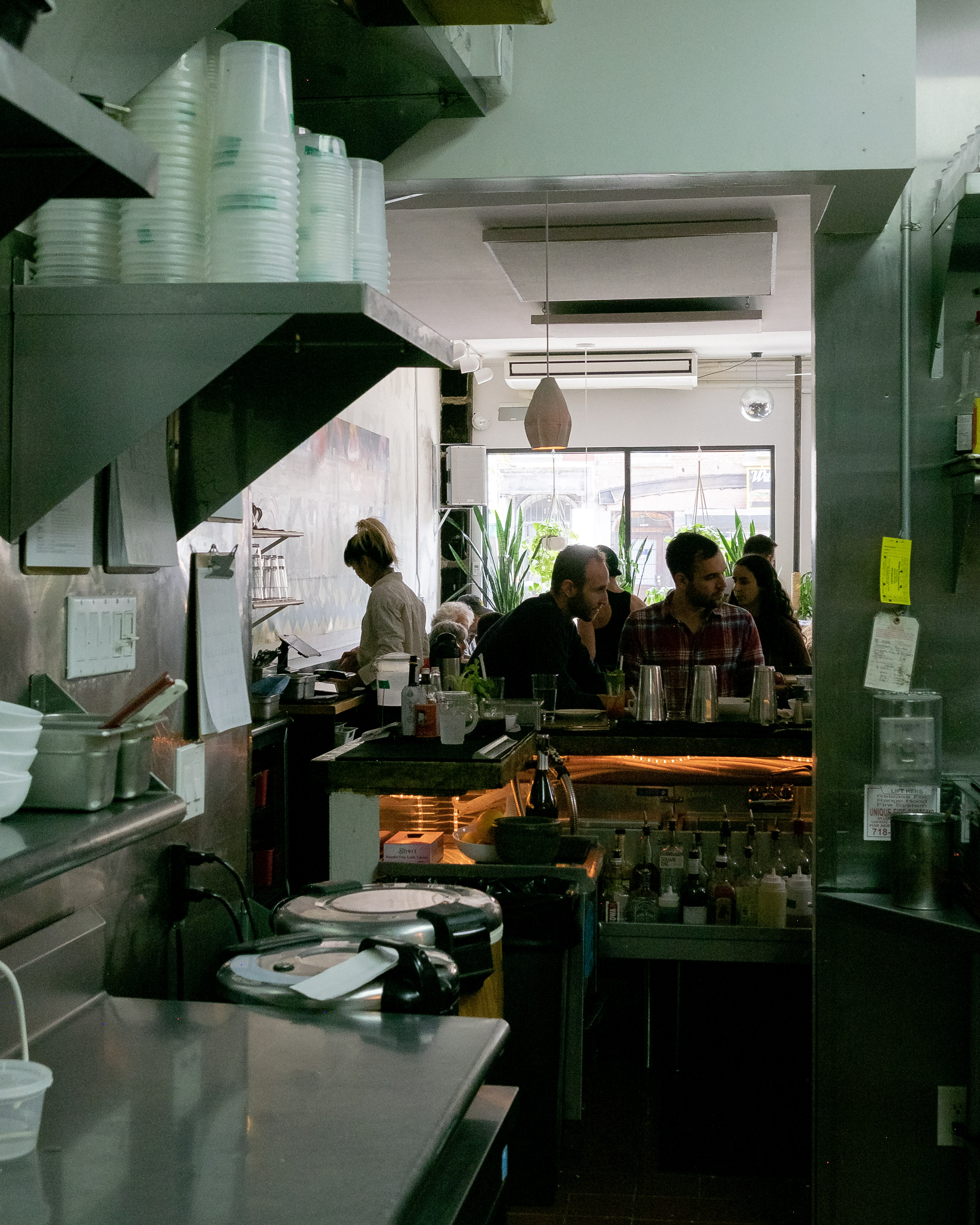 Did they poach you?

I actually hit them up! So I was planning on leaving Nom Wah after a year, ended up staying there for 2 years. I wasn’t in a rush to get out, but I wasn’t gonna be there forever. I was looking for my next move. I trailed out a couple different spots and then I hit up Trigg. He was like, yo I don’t really need anyone right now. But if you want to come through and trail, check it out. I was like fuck it, I’ll come through and trail and see what’s up. And then, I liked him a lot, they liked me and we kind of just created a thing.

So far, what is the biggest life lesson you’ve learned in the industry?

I’d never talk shit about anyone that I’ve worked with, but nobody knows what the fuck they are doing.

‍
What’s your biggest pet peeve you have with customers?

I think allergies, but you can’t really do anything about that. It’s annoying, but it’s pretty easy to cater to most. Just don’t cross contaminate and know what each ingredient contains. It’s annoying when it’s only one item, one person, one ticket on the whole board that has an allergy and you have to pause and focus on that one thing.

It’s annoying but those are the people that will always come back. It’s important to help people. I fucking hate it but it’s important. [laughs]

What is your favorite item on the menu? Off menu?

Brunch beef roll. It’s covered in hollandaise, it’s delicious. Off menu, this is the allergy thing; there are  a lot of vegan or vegetarian things that we can do that aren’t on the physical paper that we can whip up.

Where would we find you for dinner when you’re not here? What is your go to spot and your favorite? Is it Dig Inn?

That’s lunch! My go to is Chinatown stuff - so maybe Bo Ky for their country duck or any street cart for rice noodles. Favorite is Bernie’s right now - it’s literally a fancy T.G.I Fridays. My bad, not fancy. It’s a well done T.G.I. Fridays is what I meant to say.

They have white butcher paper with crayons and they have really cheap drinks and mozzarella sticks that stretch longer than your arms.

What food reminds you most of childhood?

Salted fish, like dried salted fish. The whole ones that hang in the street that you can see. Or shrimp paste. Anything stinky. Salty and stinky. Stinky tofu is not salty so that doesn’t count.

Anything exciting coming up for you?

I guess, but I don’t even know if I can plug it! I’m working on an infused chili oil. It’s just illegal because it’s weed. It’s called Loud Gan Ma, I’ll bring you one. 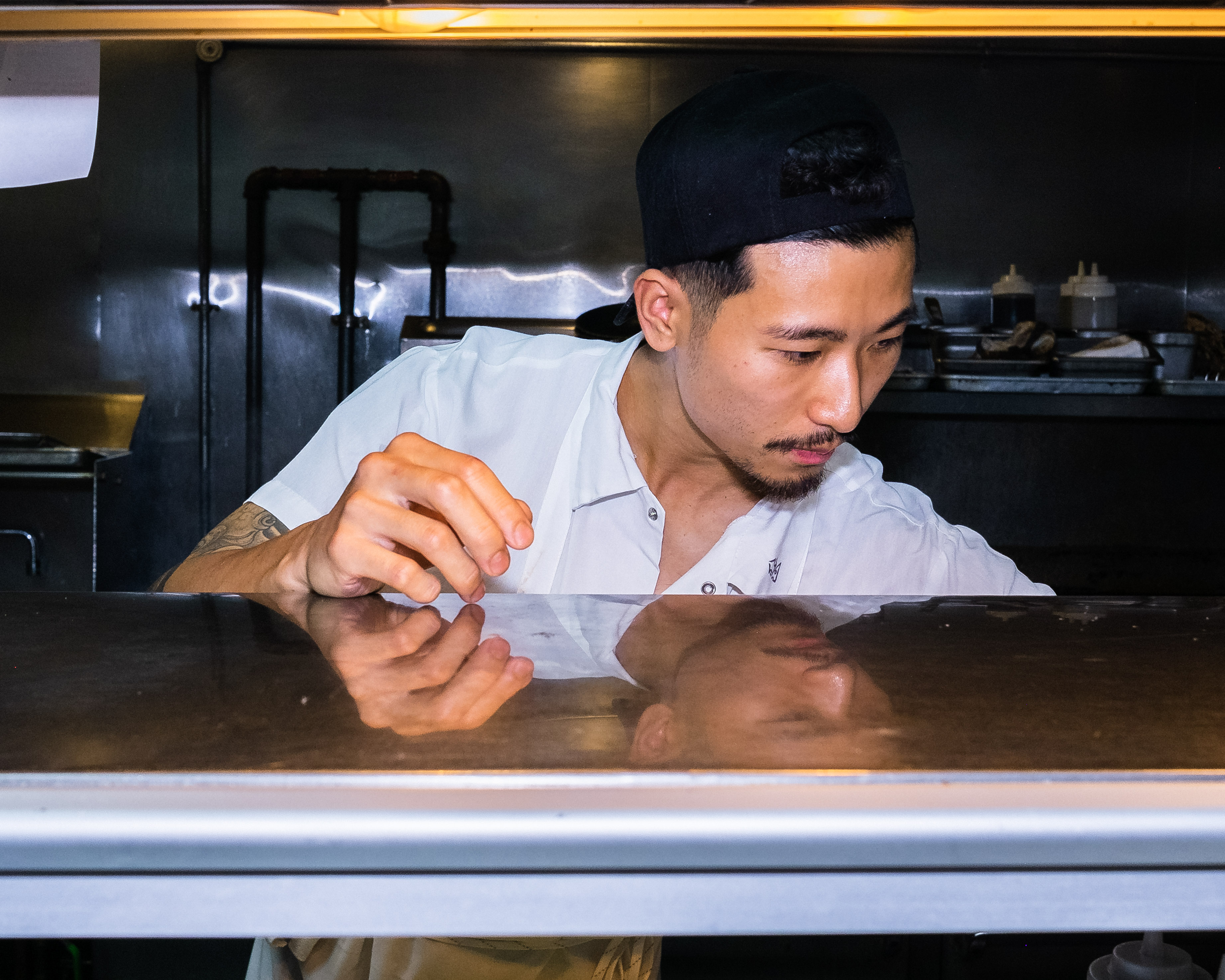 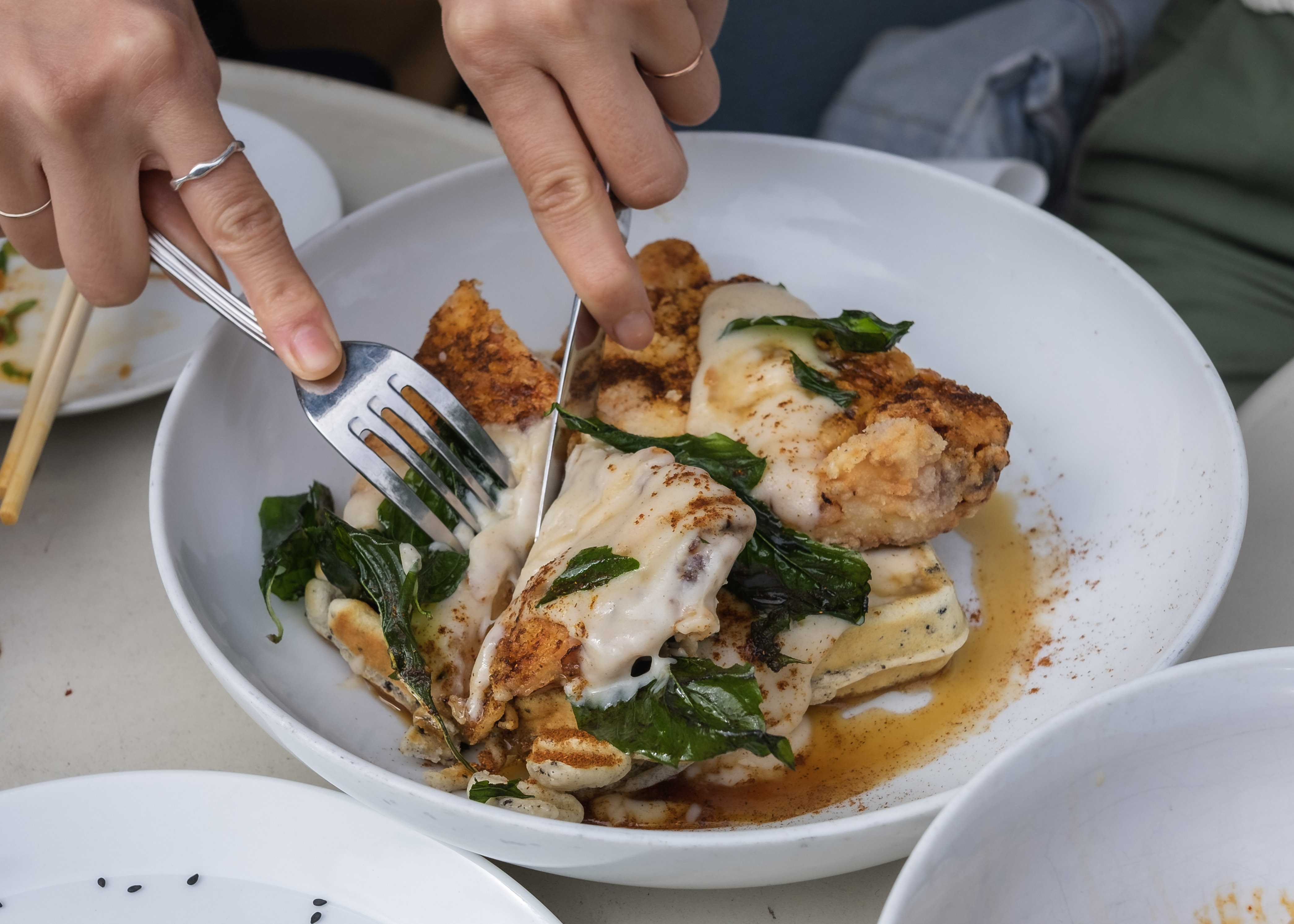 Philosophy | Too blessed to be stressed, live by it

The rich text element allows you to create and format headings, paragraphs, blockquotes, images, and video all in one place instead of having to add and format them individually. Just double-click and easily create content.

How to customize formatting for each rich text

Headings, paragraphs, blockquotes, figures, images, and figure captions can all be styled after a class is added to the rich text element using the "When inside of" nested selector system. 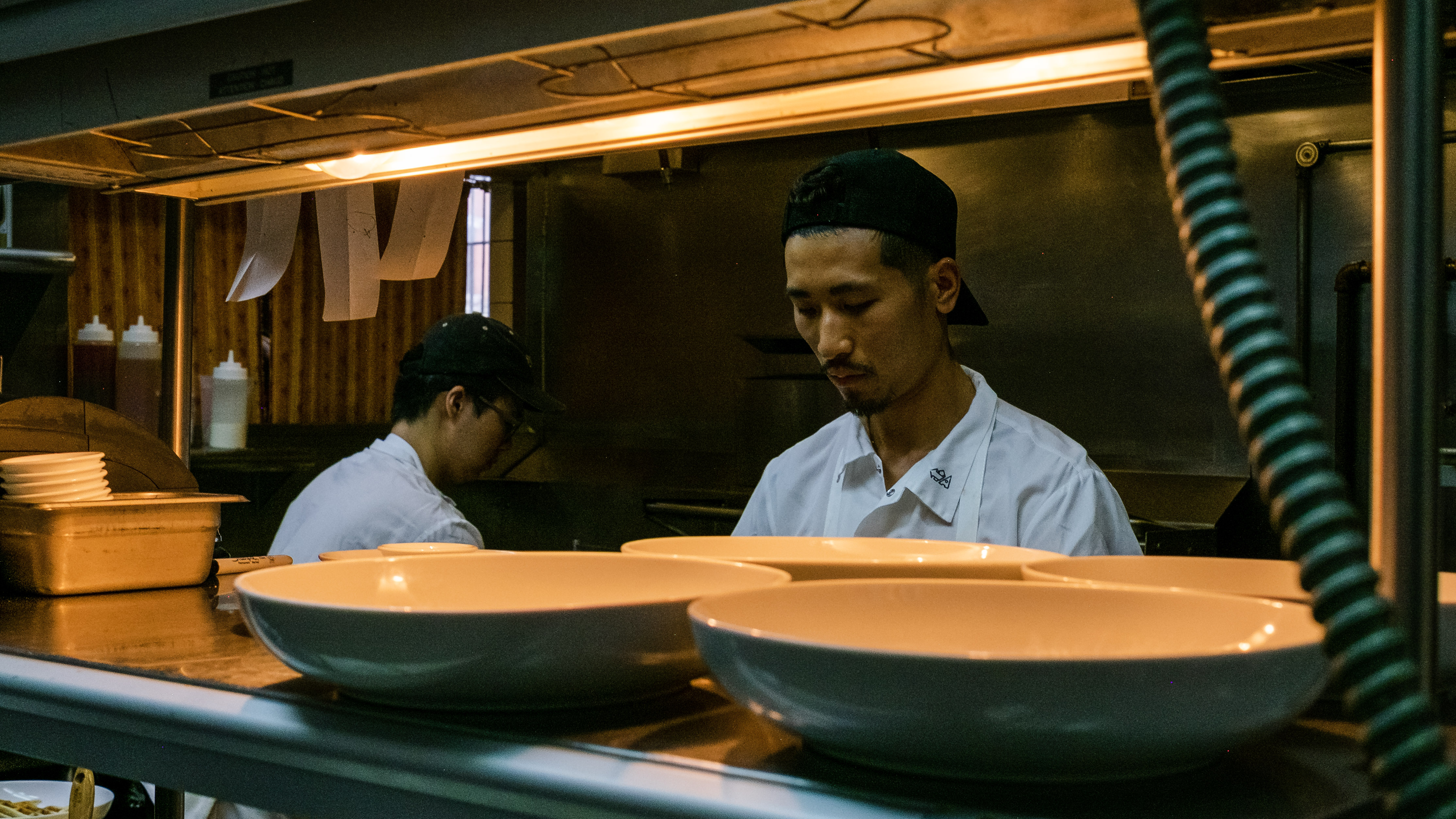